To start with, I just want to say this is purely a summary of what I took away from Nethui this year. Also I will be being careful not to takahi anyone, If I do, please let me know and I will apologise and correct it. Nethui was held inside Te Papa, and my feelings are we were in off the marae ātea at that point and that the rules of Rongomaraeroa apply. It would be very hypocritcal then of me to have spent the last 3 days talking about tikanga and te ao Māori, to then be whakahīhī and belittle others, a most un Māori thing to do. All that being said (longest disclaimer ever) here we go.

This year I attended both the 2 main days of Nethui and the partner/pre events on Wednesday also.
The first session I attended on Wednesday was about blocking/filtering parts of the internet, mainly focused at the ISP level. Some interesting discussion was had, but I’m not sure any sort of consensus was reached, but I don’t think there ever will be one on such a topic, especially when (usually) those making the decisions are those least likely to be impacted by them. But it was a good discussion to be part of nonetheless.
After lunch, Amber and I got a little lost and ended up in an Ally Skills workshop, which was the best accident of the whole 3 days. It was a great workshop that I won’t try to summarise here, but if you ever get the chance to do it, you should. I’ll be happy to explain why in person.
That evening there was a Māori in Tech dinner at Dragons restaurant. It was great to see some familiar faces, and meet some new people.

Thursday Nethui proper started with a whakatau, and then into the first keynote. This was interesting, my one piece of feedback, and I tweeted it at the time is that I prefer (and think it is more effective) when people use examples from their own place/culture, than using others.

I don’t particularly like when people talk about other cultures/places when their own has a crap ton of examples they could use instead. Just saying

I don’t think anyone from a settler colony would have to think too hard to find examples of oppressive and brutal regimes.
Following that I attended a session on Environmental Sustainability and the Internet. It was a great session, with one exception. The guy who tried to tell everyone that there were no tāngata whenua left

Wow someone just went there, in response to people wanting to hear Māori voices “what’s the difference between Māori and other people?” #nethui #nethuienvironment this is why Māori need to travel in groups in these spaces

I wish I could say it was surprising, it did seem to surprise a lot of the non Māori that he would say that, but we hear it all the time. What was surprising and in a good way, was how quickly the room shut this nonsense down.
So a bit of a rocky start to the morning.
After that I went to the session on Copyright, the main topic of discussion was the upcoming copyright reform act, and how the time to make submissions is now. It was a little worrying how people are still quite confused between copyright, trademarks and patents. I think that this is something that perhaps would be a good mini talk in its own right. The discussion was good, and one of the ideas was that Te Tiriti o Waitangi should have a much more prominent position in the legislation. Which was great to hear.
Following lunch there was the keynote from Prime Minister Jacinda Ardern, who spoke eloquently, and in my promise of non takahi, I’ll leave it there.
I had quite a few issues with the panel afterwards, I am not going to name names, but when you are talking about what happened in Christchurch in March, and the one Muslim on the stage talks about white supremacy, the last thing you should do is talk about terrorism with all your references being non white supremacists. It was like watching gaslighting play out on stage.
After that, and a few deep breaths, I went to Building a New Zealand Disinformation Response plan. The main thing I took away from this is we are way underprepared for what is coming our way. And that the existing organisations such as the BSA and the media council are not able to deal with things other than traditional media. You may be able to guess how I (as a Māori) think they do dealing with traditional media currrently. It was also discussed how there is no one place a person could report disinfomation too.
Following this was drinks, nibbles and networking. A long day, equally interesting, positive and frustrating.

Friday the first up for me was the session on Internet of Things. It quickly became clear data privacy is the main issue so most of the discussion focused around this. I could sum it up by saying non-Māori seem to have far more trust in the Govt and its agencies than Māori do. Another reason NZ history needs to be taught in schools.
Following this was Amber and I facilitating a session on Digital Colonisation. I think this went ok, but I’d much prefer someone else summarised/shared their opinions on it than me.
The final session I attended was Technology & Māori Community wellbeing. I missed the start as I got caught up downstairs after our session, so I think I missed quite a lot of the context, so I didn’t really get much out of this. My fault entirely.
After the wrap up, a few of us went out for some drinks and dinner, which was fantastic. This leads me nicely into the highlights (for me) of Nethui.
It was the people, it’s always the people.
Catching up with old friends. Hanging out with the rangatahi Māori, hanging out with the other mātua and whaea, making new friends.
I particularly liked watching the young Māori speak up, with clear and direct words. We could do a lot worse than to get out of their way.
Ka pū te ruha, ka hao te rangatahi 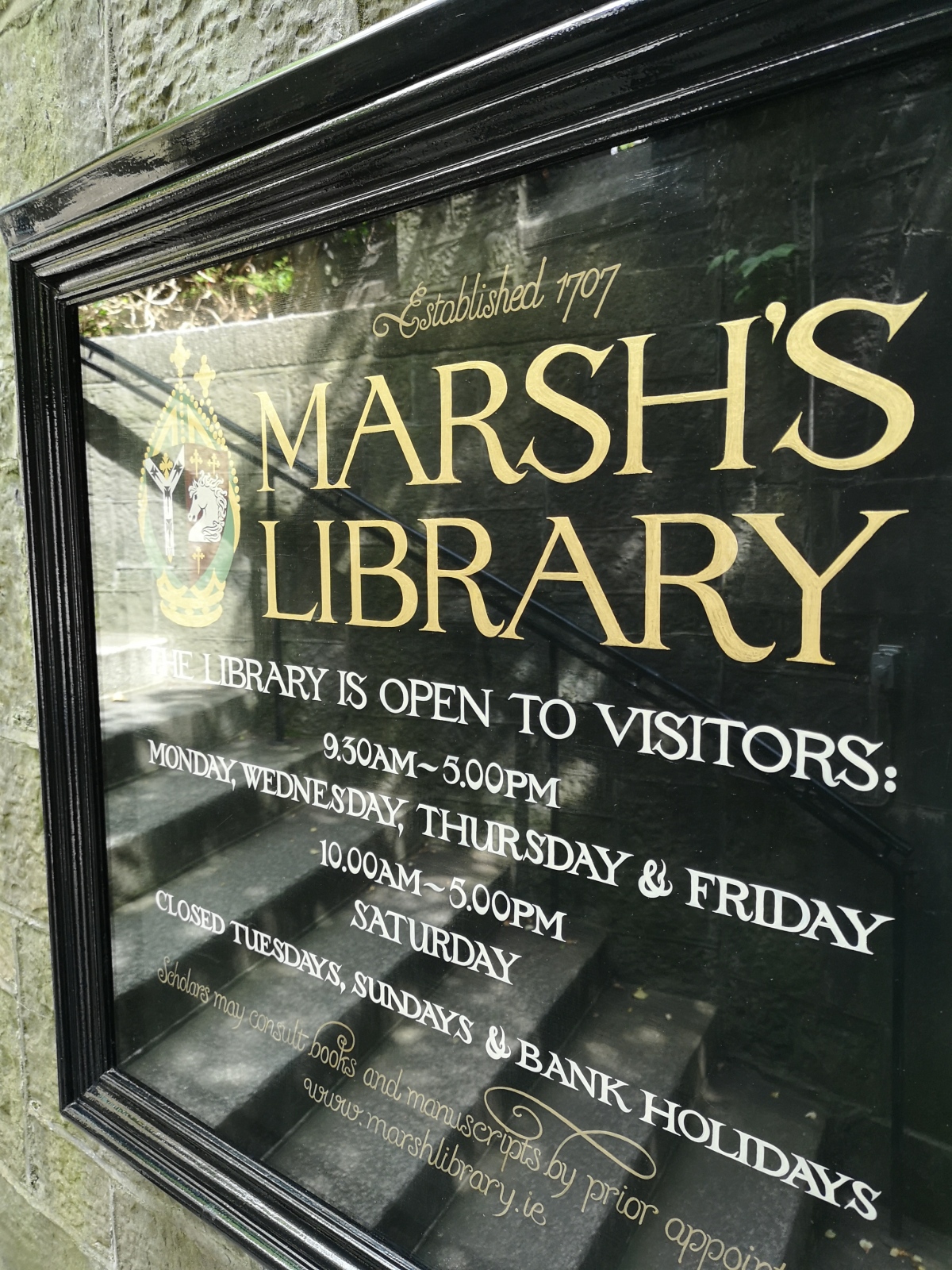 As is always the case this was the best Kohacon yet. Dublin is a fantastic city and the hospitality of Interleaf, PTFS Europe and the Dublin Business School is second to none. 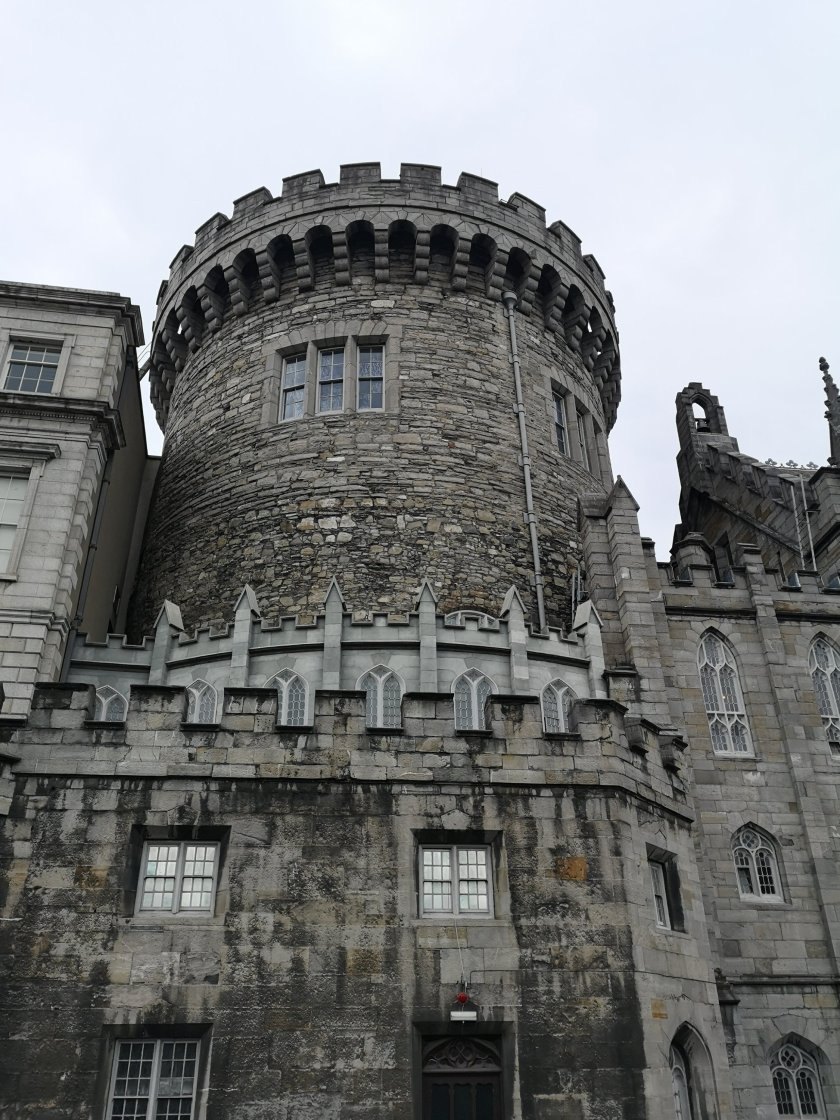 The conference was held at the Dublin Business School, who are big champions of open source and open access. The school uses Koha, Moodle, Shibboleth, eprints (and I think others I have forgotten). It was spread over 5 days, 2 of presentations, 2 of workshops, and one day of cultural activities.

The talks were uniformly excellent, covering a wide range of topics, from Business analysis to migration stories. One of my favourites was Marcel giving the best non technical talk about containers (docker mainly) I’ve ever seen.

The workshops were also well received, with my favourite being the one on plugins.

But the best part was again the people. Kohacon are about kanohi ki te kanohi, about restrengthening bonds and creating new ones. It’s vitally important that online communities make the most of any in person time they can. 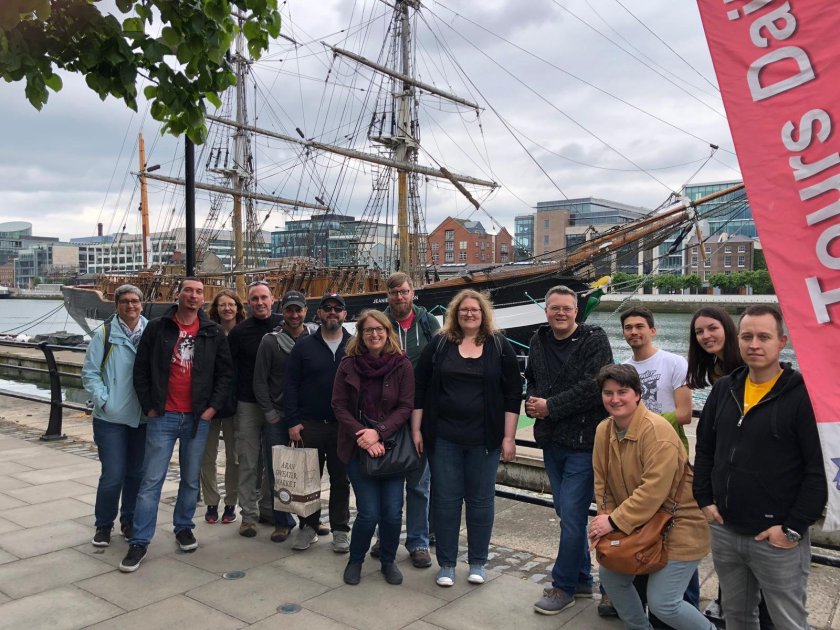 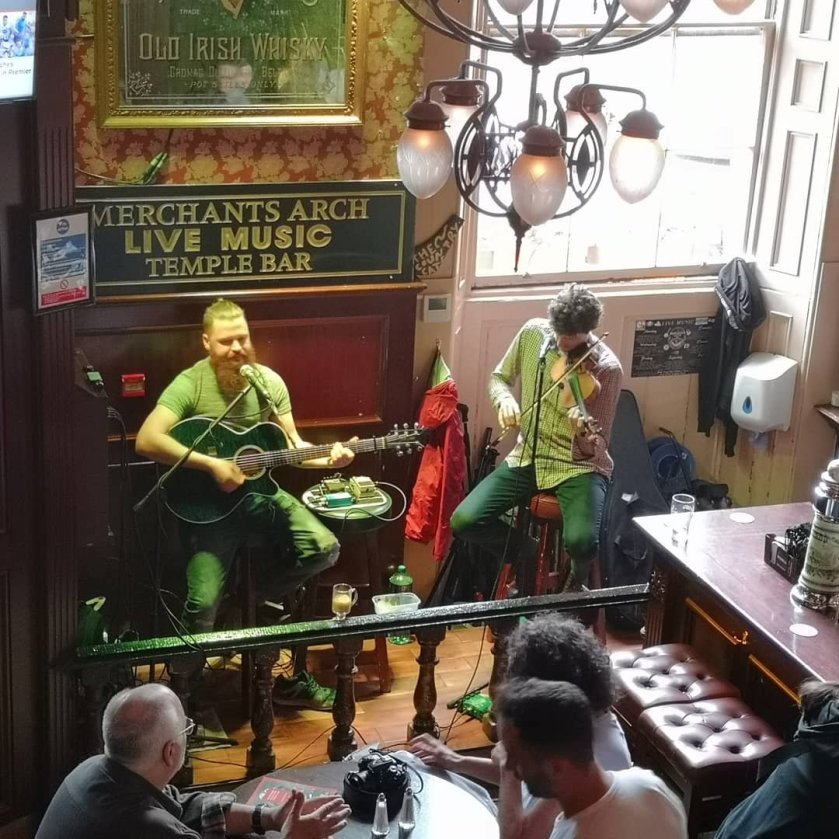 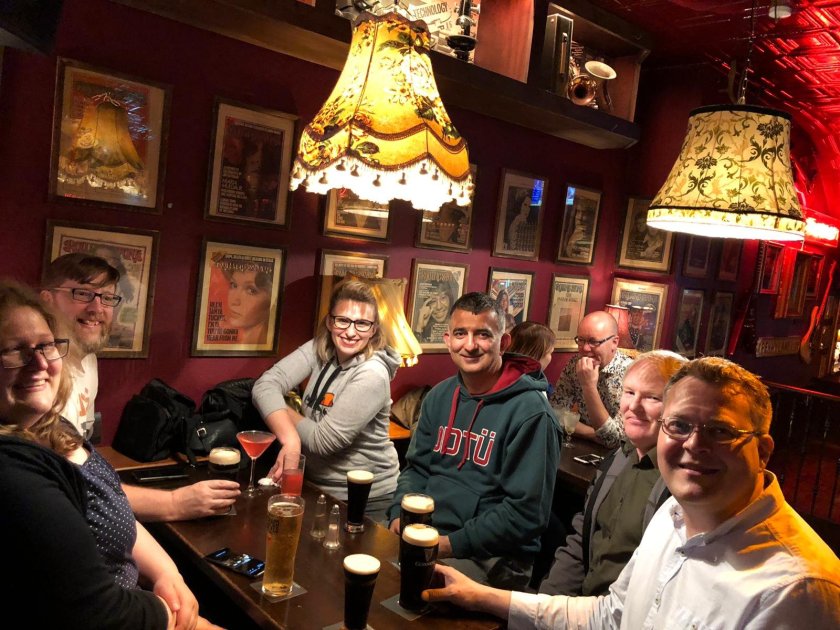 And because it’s me I’m going to finish with food photos. 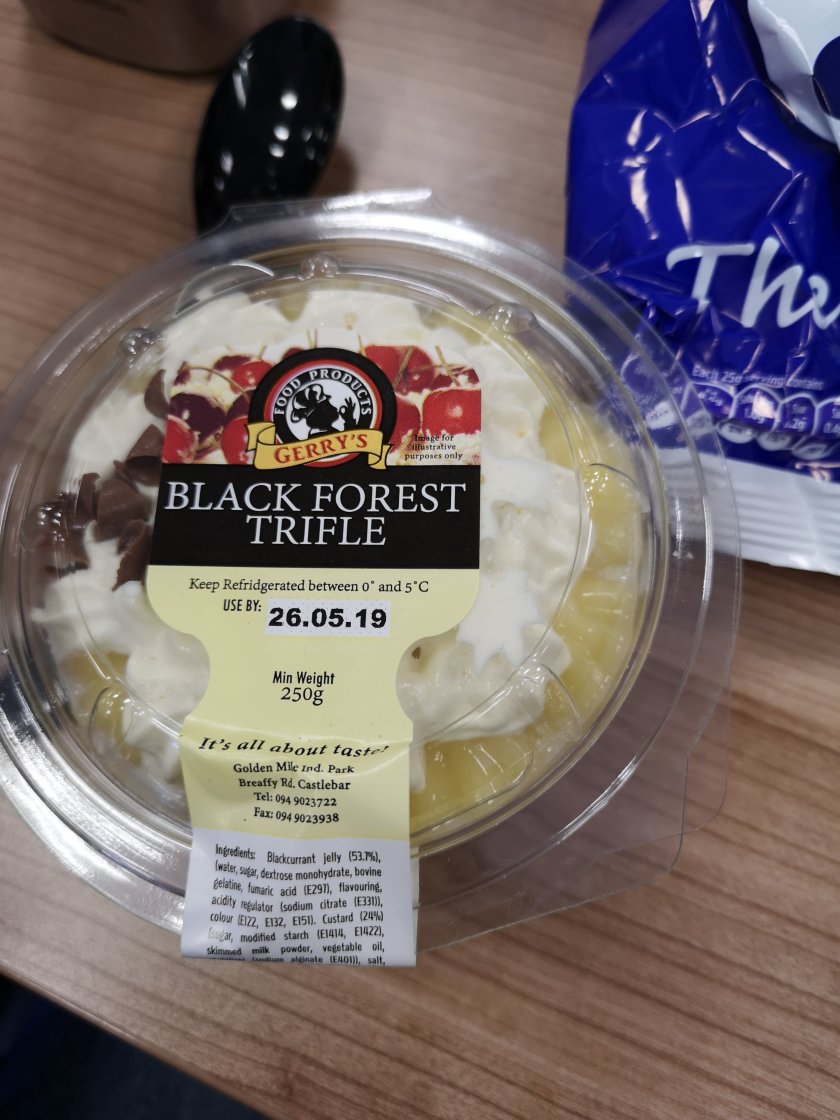 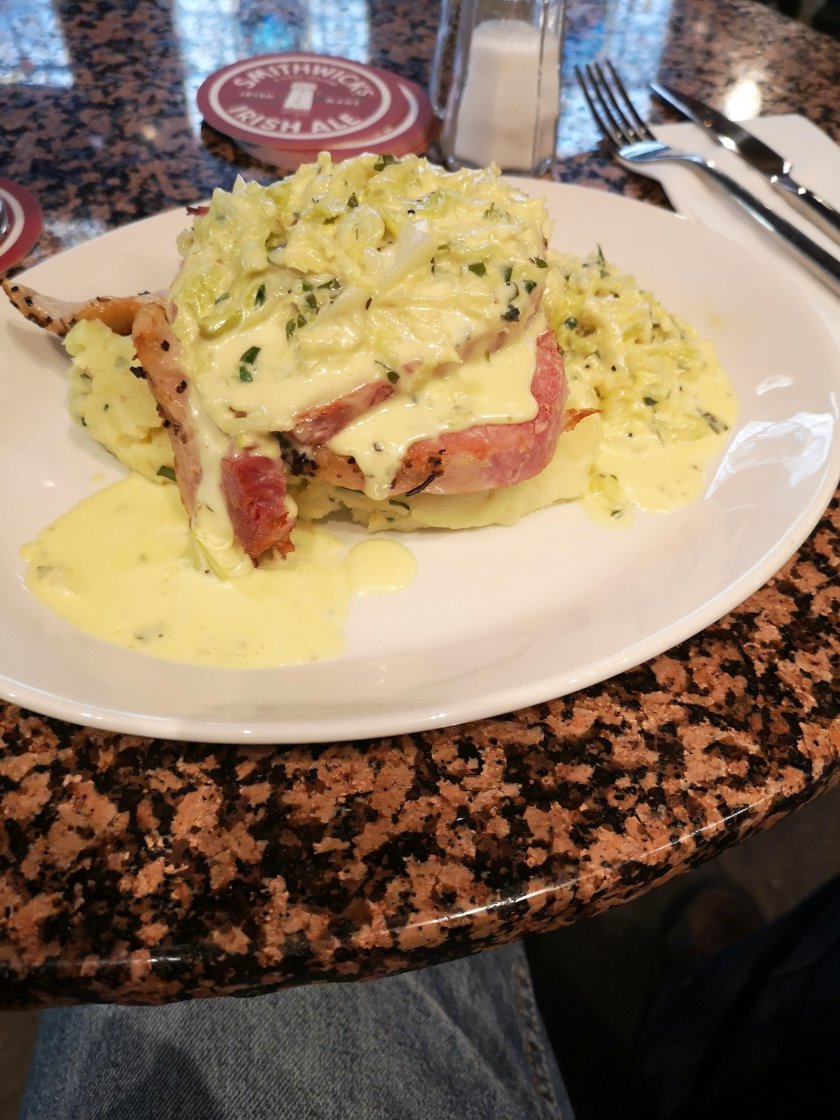 As always this was the best Kohacon yet, I will write up a more technical post over on the work site but I wanted to write up a more personal one over here. Kohacons are different to any other conferences I have attended, it feels less like a conference and more like a reunion. One of the other attendees remarked that there was a certain something that he couldn’t put his finger on. I replied that I thought it was whanaungatanga.  And I really think that is what it is. The conference has a really great gender balance, and there were attendees from Pakistan, Australia, Sweden, Norway, Finland, Ireland, UK, New Zealand, Germany, Kenya, Guyana, Mexico, France, Canada, Turkey, Brazil, Argentina and of course USA. But despite our many differences, new friendships were quickly made and old friendships renewed. Before the conference had even started people who had never met each other before drove off to look at Mt St Helens together. Others went to the zoo, others to the beach. Every night communal meals were organised, and over breakfast tales shared of the night before. One of the traditions we have is a day between the conference proper and the hackfest after where we all do something together. This year there were walking tours, jet boat rides, tours of Powells bookshop and tours of the Japanese gardens.  Another of our  tradition is sharing treats from all around the world at the hackfest. This eating, drinking and talking together is the best part of the conference, it builds bonds that, even when we return home and are 1000s of kilometres apart, are still strong. When people ask how  we manage to coordinate development across language and cultural differences, spending time kanohi ki te kanohi (face to face) is how. Spending the time to whakawhanaungatanga with each other might not seem important at first glance, but it is what has kept the project strong and getting stronger for 18 years now. If anyone ever says there’s no time for mihimihi or whakawhanuangatanga, I think they are missing out, and are weakening whatever they are endeavouring to achieve

Chicken and tortilla soup, and a crab and shrimp sandwich 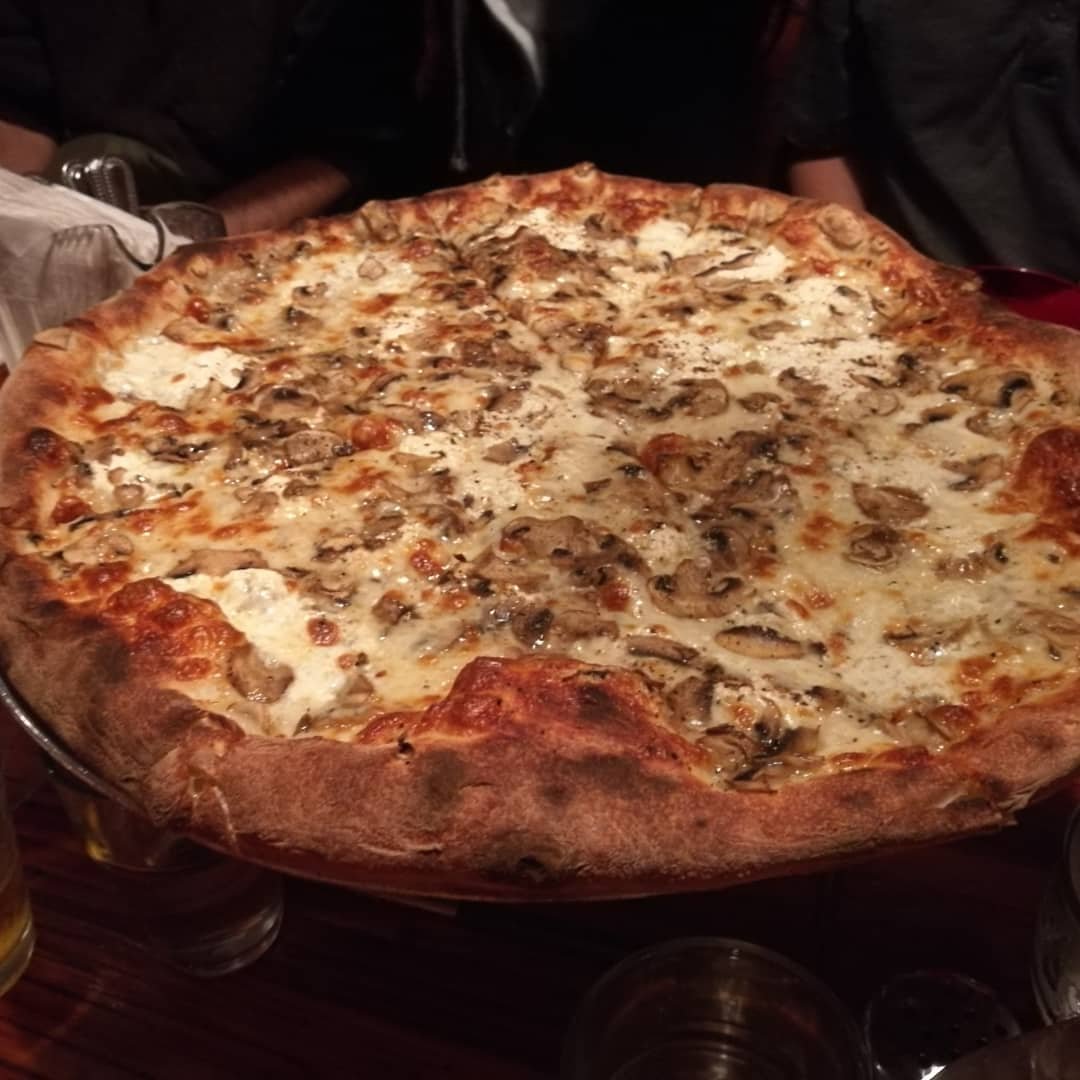 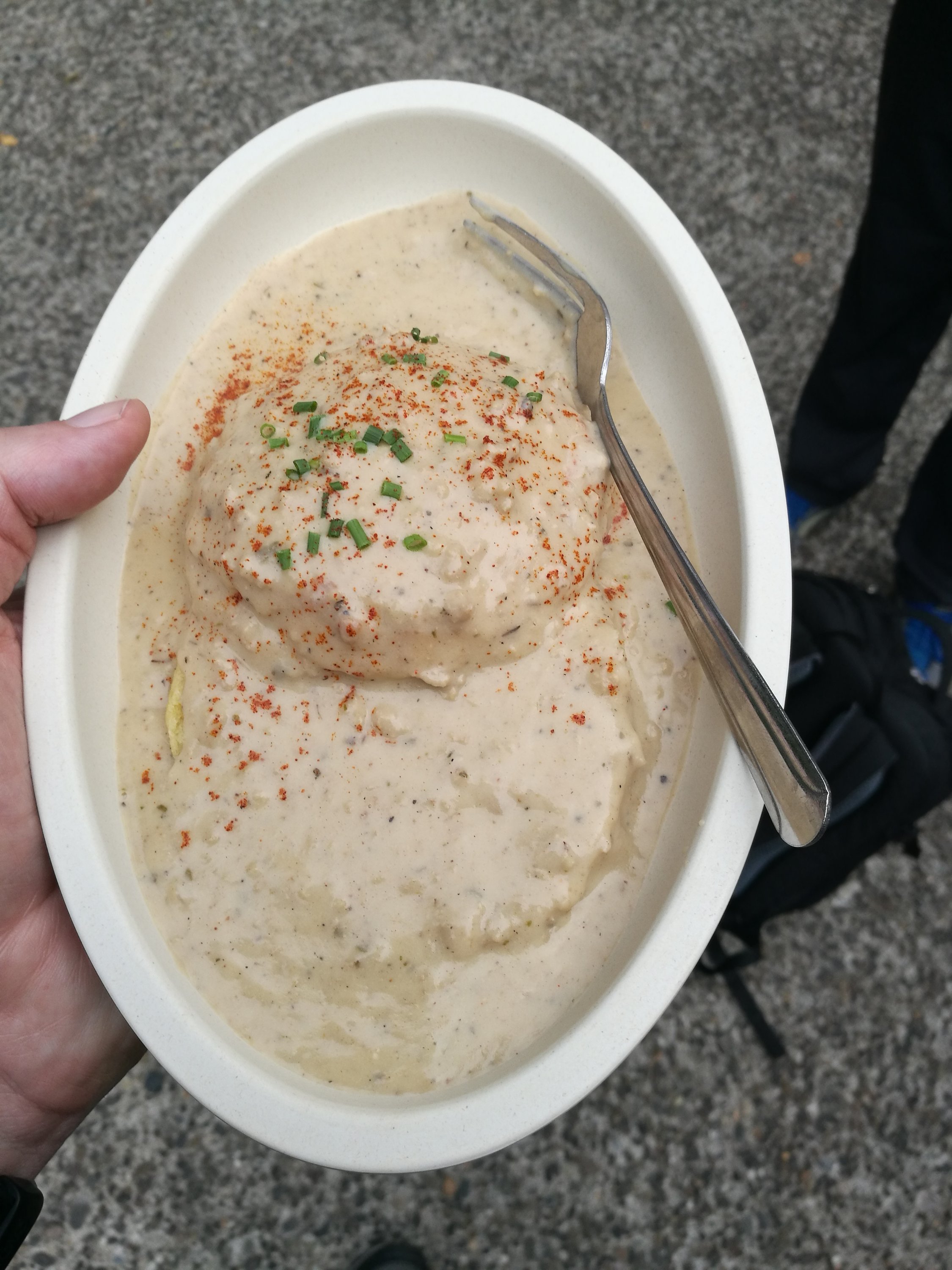 What it says on the packet 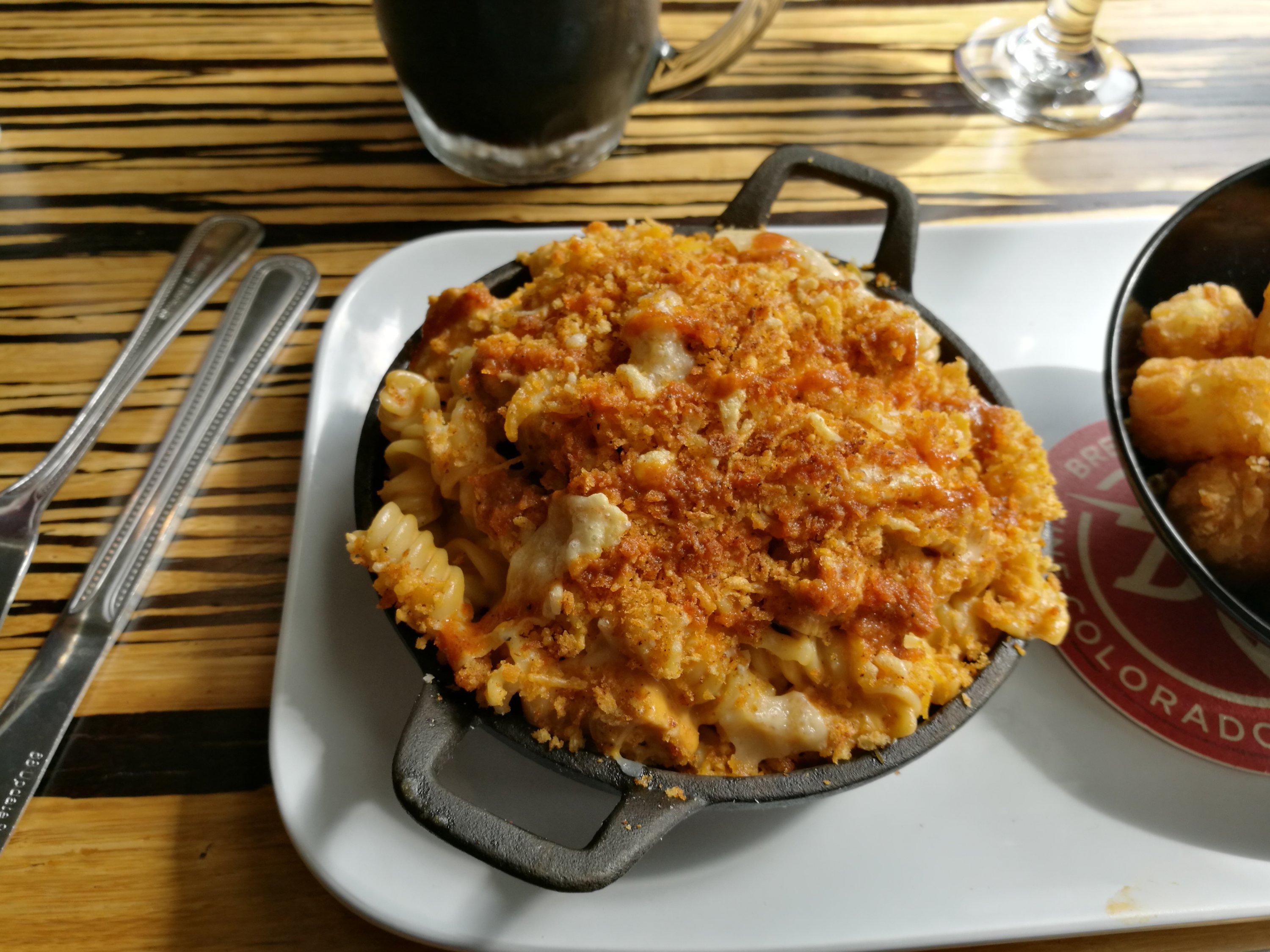 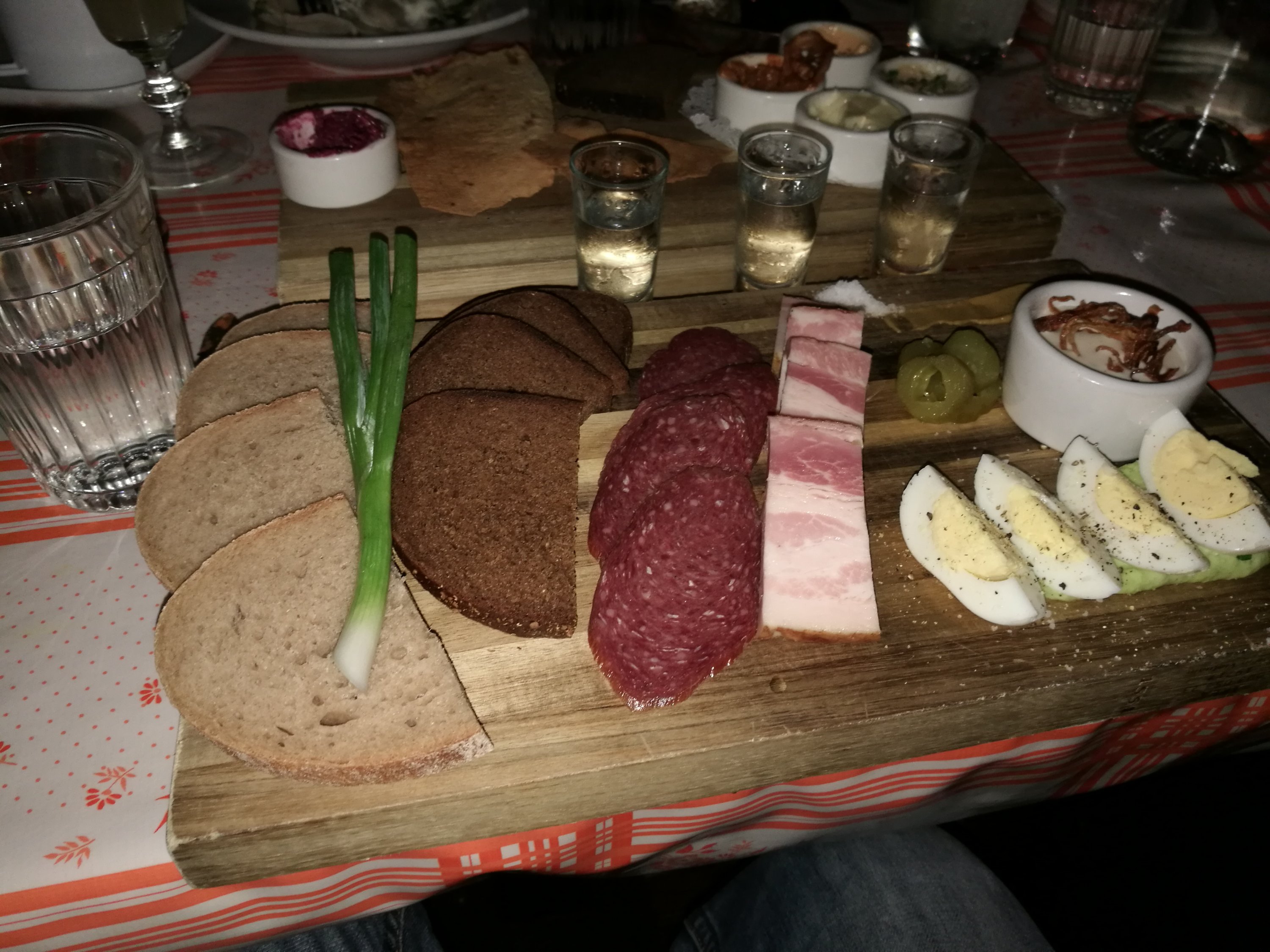 A vodka drinking board 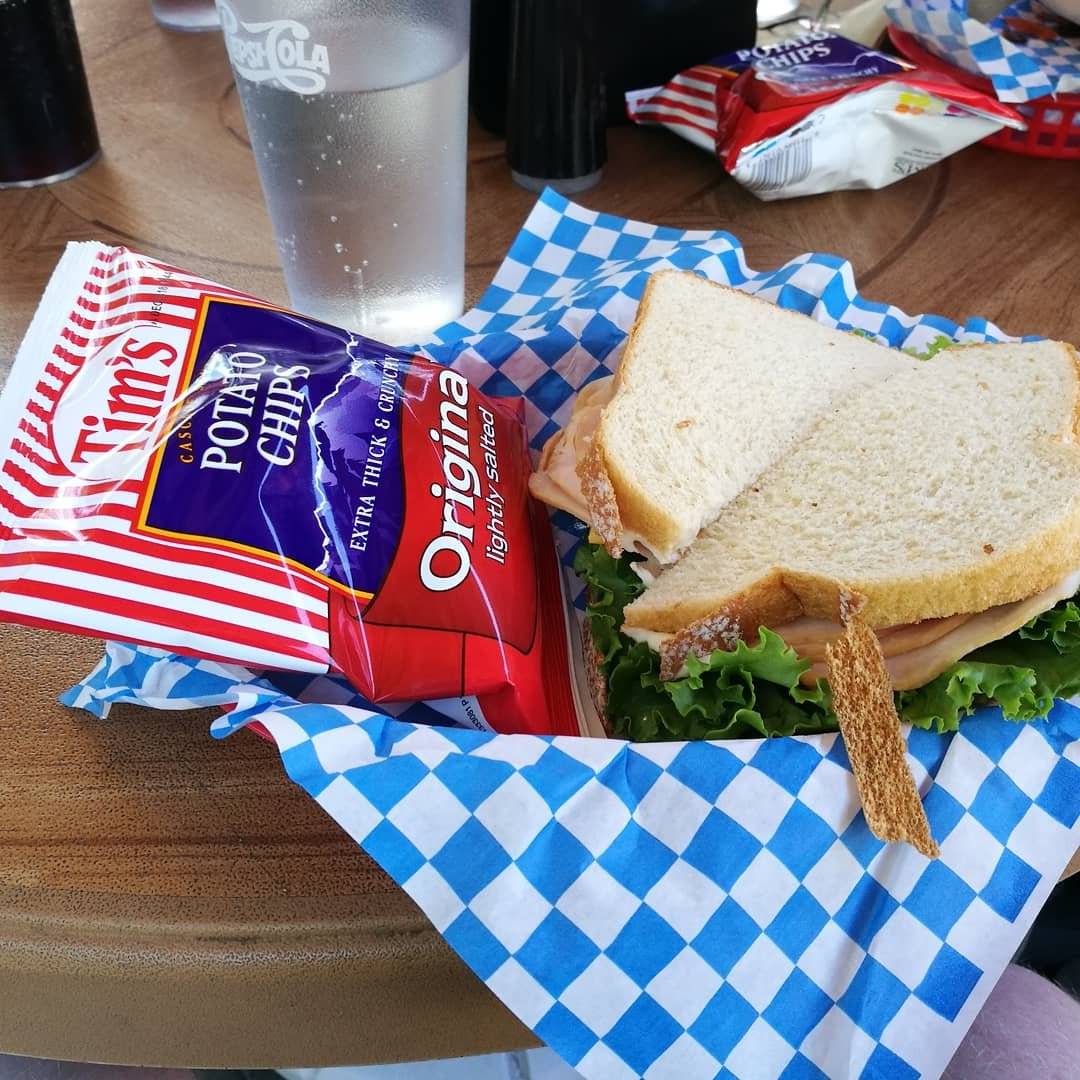 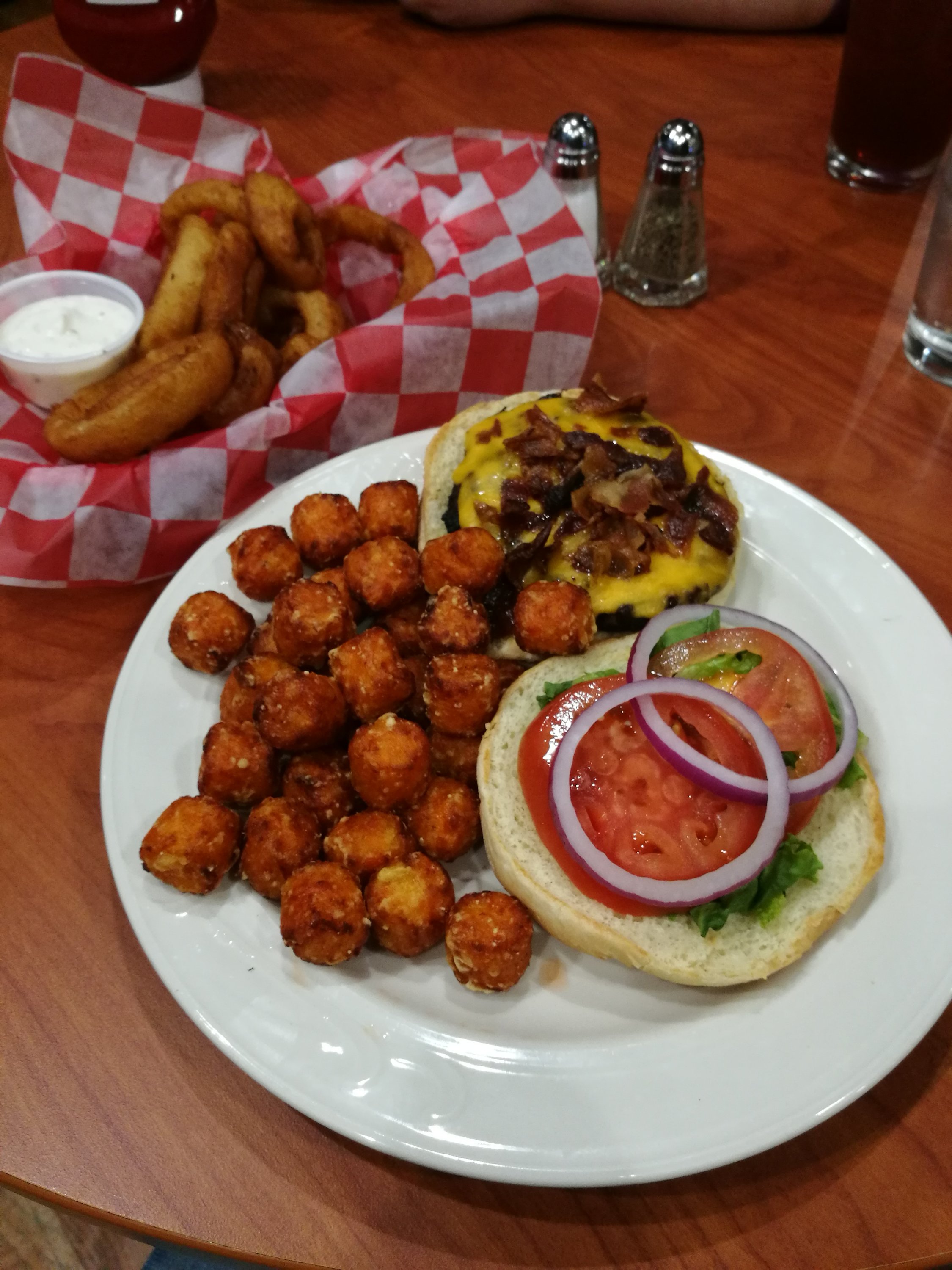 Another burger and tots

David Nind is one of a kind. Neither he nor the organisation he works for use Koha, but he has been active in the community for many many years. He helps with maintaining the wiki, running the twitter account, answering many many emails on the mailing list, attending user groups and so much more. The work he does has been incredibly valuable and is a major part of the success of Koha.

So thank you very much David

Me he manu rere

I was just talking about 3000 year old Welsh skulls and Māori not being tangata whenua and bam, patu right in my face. Had to stop, and go down to the A&E

As I was being consistently wrong about everything, as I am wont to do, I heard a mighty yell of ‘D haaa’ and smack, patu on the point of the jaw. Shut me right up I must say.

We were performing our ‘Haka’ to advertise insurance, when someone came running up, and screamed ‘Ana tō kai, kai toa’ and hit the head of marketing in the face with some sort of club thing.

I don’t know what happened, one minute I was saying “muesli bars have too much sugar in them for growing bodies” and the next minute, tewhatewha upside the head. Well I never!

Look as the enlightened feminist I am I was just commenting on how ‘ethnic’ women are more attractive if they don’t look ‘ethnic’. Then crack, taiaha to the temple. I said don’t hit me I love women and what about fat yoga… and then pow, wahaika in the waha.

Some one started an email to me with Kia ora, so I was typing out a reply saying “I’m not Māori please address me in English”. As I was about to hit send a felt an immense pain at the back of my head and someone yelled “English that, cracker”