Yesterday was a pretty full on day, it started with the Island Bay market day, which was pretty small but neat anyway. Laurel found a fellow refugee from the US selling funnel cakes, and I found a fantastic jar of zucchini pickle.

Next on the agenda was the Greek Food Festival down in the overseas terminal. It was all a bit crowded and almost impossible to navigate with the push chair, but I did manage to buy some fantastic Calamari.

Then it was off to Te Papa for the 10th birthday celebrations. We missed the giant lamington cutting, but saw a awesome steam powered street organ, some Cook Island drummers, and the NZSO playing with Mere Boynton, Whirimako Black, Debra Wai Kapohe and Derek hill. Once again so many people but pretty cool.

Kahurangi’s favourite part of the day, was the big spinning marble ball in the foyer of Te Papa 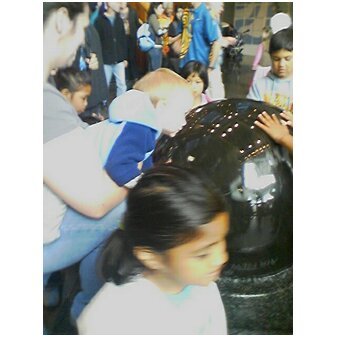 He was smacking at it so fast my cheap cellphone camera couldn’t focus fast enough. 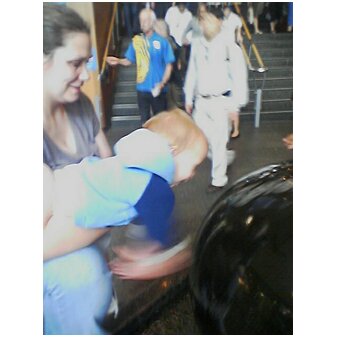 The day ended with the Island Bay Parade, which was even shorter than usual this year. My highlight was the mermaids riding bicycles