Tomas welcomed the delegates to the conference, first in Spanish and then in English. 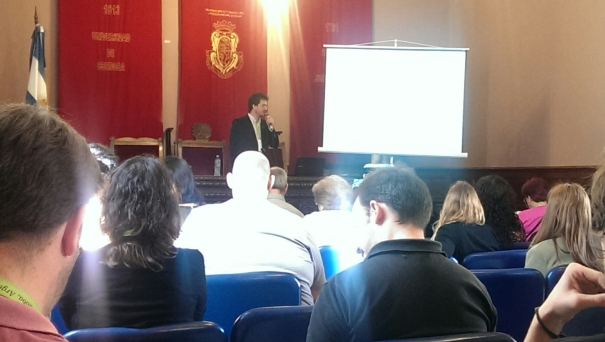 Tomas Cohen Arazi did the keynote this really tested my Spanish, but I caught bits, especially when he translated Māori to spanish. I think he  covered some of Pauls talk, but that is perfect because Paul will be talking in English, so between the 2 of them, the community structure will be well explained. I’m pretty sure the talk also covered a brief bit of the history of Koha. But the main gist seemed to be introducing Koha to people. He covered how releases are made and when they are made.

He also talked about the upcoming 3.18 release for which he is the release manager, so far 200 bugs/enhancements have been dealt with and more than 700 patches integrated. The main highlights are a refactorisation of our UTF8 handling, to be much more robust and consistent. As well as some new features and many fixes of course. He listed some bugs, but my Spanish is nowhere near good enough to catch them all, I will try to get a list from his slides later.