So this morning I was doing my impression of a T Rex making breakfast (don’t ask) and Atarau said “they don’t make that noise you know.” I said “you are probably right but no one has ever heard one”. That caused Kahu to jump in with “well what about homo sapiens?”
That started me on explaining neanderthals, cro-magnon, homo sapiens etc.
Which prompted the where did they come from question. So as I was making sandwiches for their lunches I attempted to explain evolution in 10 minutes, which resulted in the following comments.
Kahu: Oh, like upgrades.
Atarau: That’s why I like bananas eh?
Kahu: Oh and that’s why some kids are sometimes silly, they are still growing out of being a monkey.

I’d call it a moderate success.

In part two of explaining concepts before being fully awake, tune in for Chris trying to explain sexism and racism. 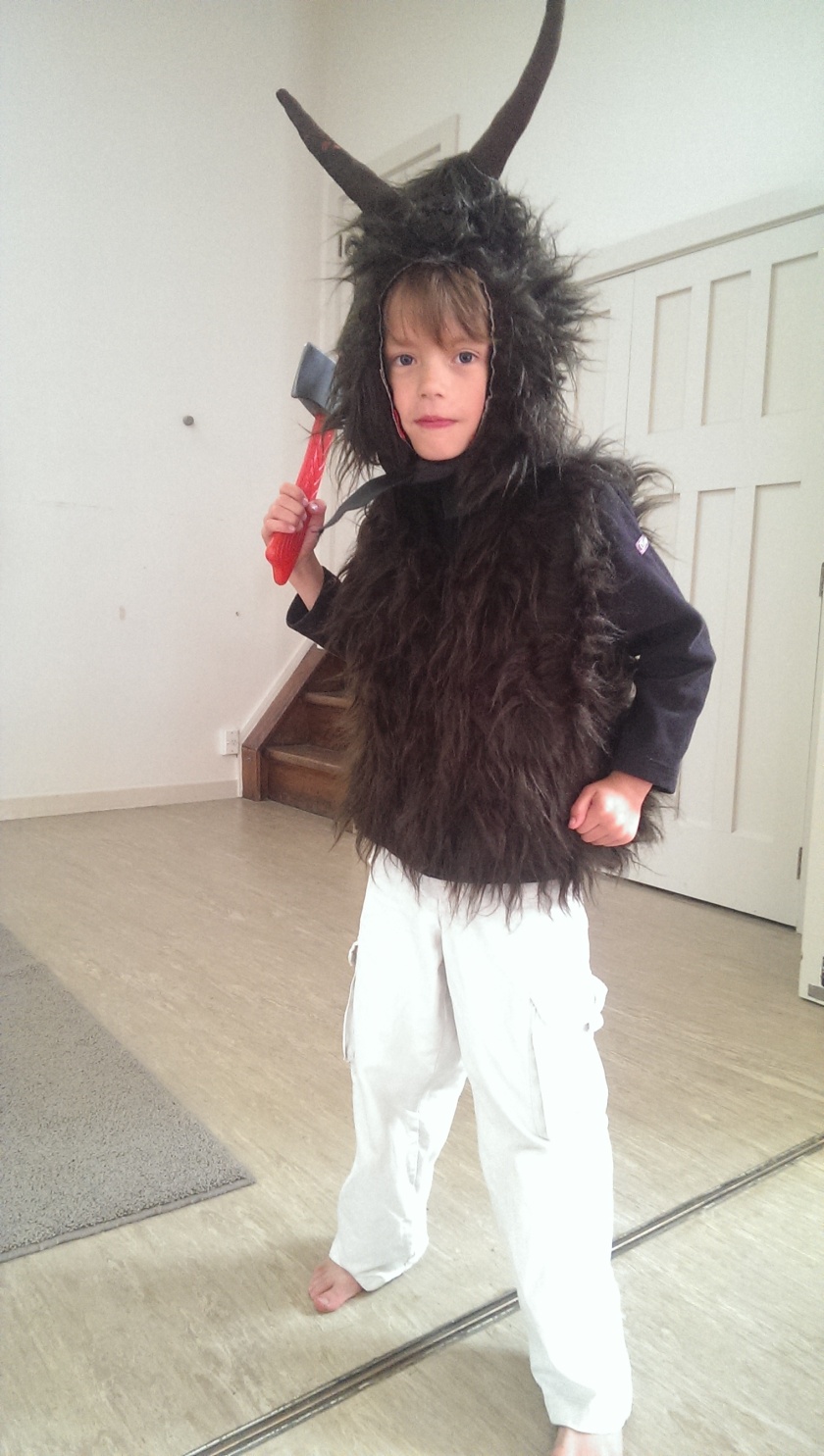 A Minotaur, costume made by Kahurangi and Aunty Donna 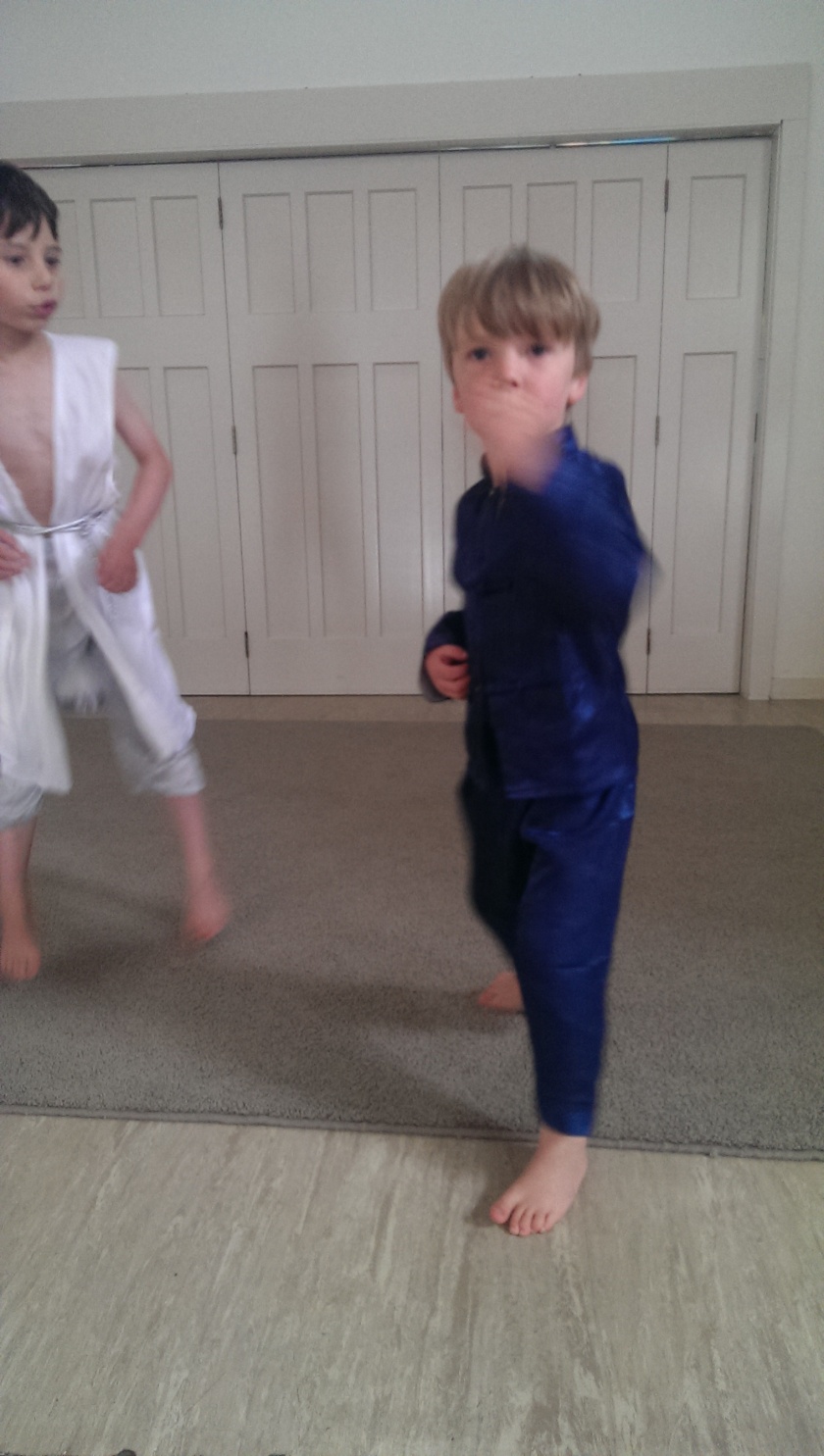 And a ninja (I know, I know he is wearing Chinese, not Japanese clothes, you try reasoning with a stubborn 4 year old) 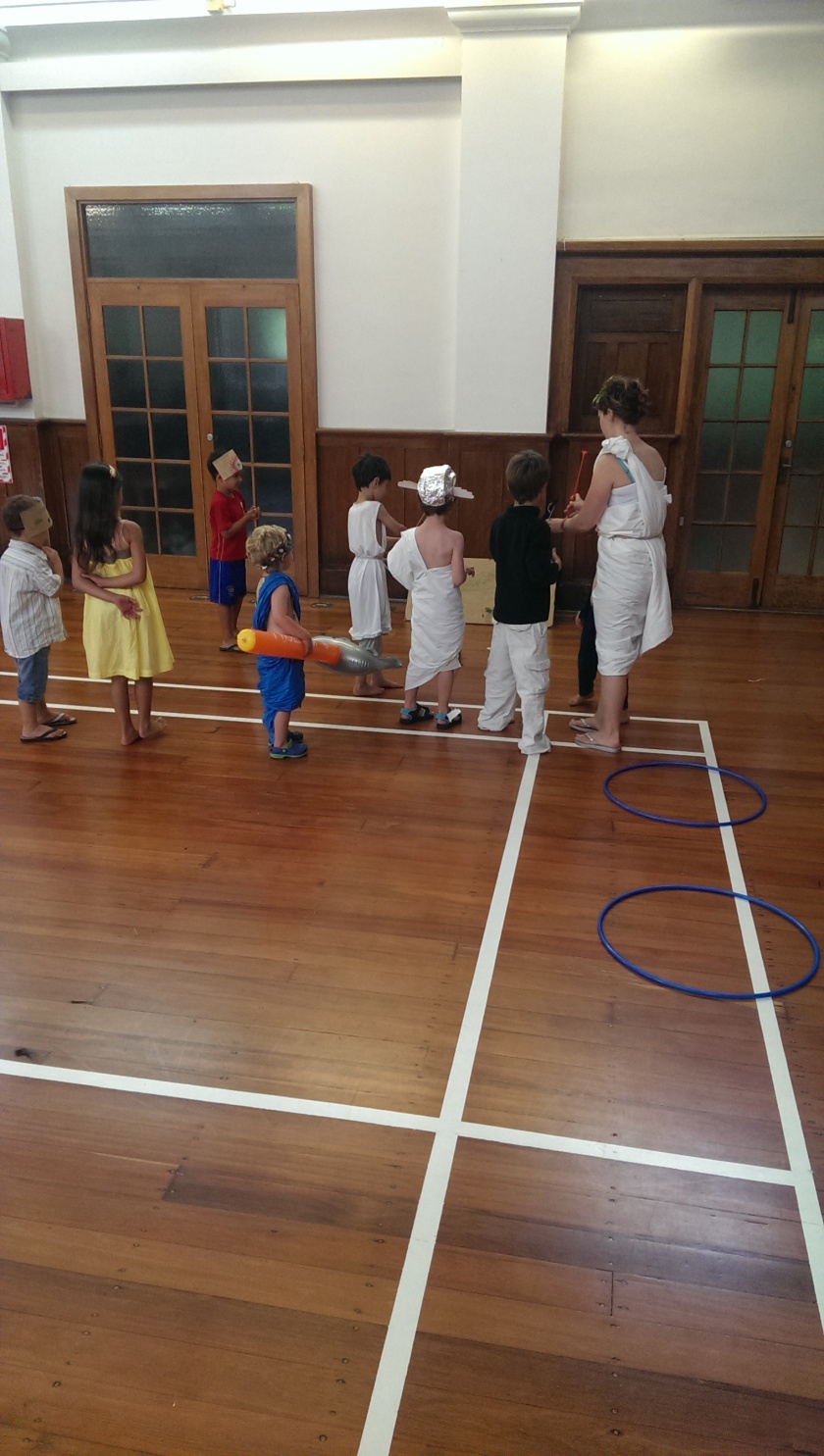 Archery practice.
At the moment they are playing duck duck Zeus.

So as many of you probably know, Te Pō Atarau really really wanted to have Māui come to his birthday party. As usual Laurel stepped up, and began emailing anyone she could think of and running an advertisement in The Big Idea. Unfortunately this was proving to be fruitless, however a reporter the Sunday Star times heard about this and called Laurel to ask if she could do an interview for the paper.

After a bit of hesitation (reporters who write what you actually say are pretty rare) we decided to do it, so Laurel did a phone interview and one of the most excellent photographers I’ve met came to take photos of Atarau. We got the photos taken in Upper Hutt at my mum and dads because the kids were out there. That was that we thought, some small human interest piece buried in the huge paper that is the Sunday Star Times. Nope, page 7 of the paper, and the lead story in the National News section on stuff.co.nz. It peaked at the 4th most viewed story on Sunday, and has now been liked on facebook 707 times. My contacts tell me that the story was viewed about 18,700 times on that Sunday. Here is the story as it ran in Stuff.

What was even better that after the story ran a woman who saw it contacted Laurel and said she knew of the perfect Māui, a 1st year drama student at Toi Whakaari. As if this wasn’t fantastic enough, Laurel was also contacted by Tanemahuta Gray, yes that’s right the man who wrote and directed ‘Māui : One man against the gods’ .. how cool is that? However we had already been in touch with Justin, and felt it was right to give him a chance. But we are still humbled and incredibly appreciative that Tanemahuta offered.

It turned out that Justin was utterly fabulous as Māui. He performs magic so Māui Nukurau (Māui the trickster) was the character he decided to play. After the kids had all arrived, we sat them down and Laurel started to read the Māui and the sun. 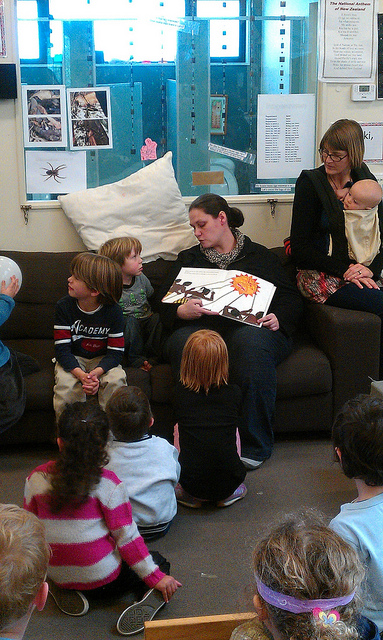 At the end of the story Māui appeared, as if out of nowhere, with his taiaha, and from that instant on he had 27 children spellbound. He started with a magic show, that truth be told had the adults spellbound also. You think doing magic tricks are hard, try them with no pockets or sleeves! 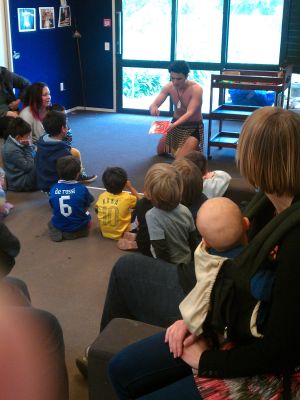 The kids loved it, Te Pō Atarau did not stop grinning the entire time, and had to keep telling everyone ‘My friend Māui is sooo funny eh?’ 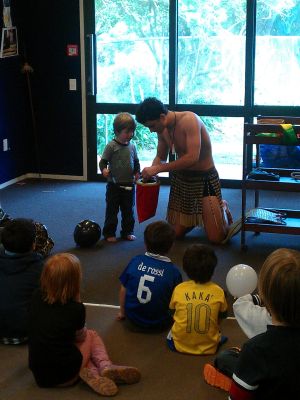 After that was finished, we dished up some afternoon tea for the kids, but there was no stopping Māui, he got out his guitar and went to sit at a table, of course Atarau had to go sit next to him. One of the cutest moments for me was when Atarau asked him “Māui do you want a drink?” and then went to get him one.  This next photo was about when Atarau asked Māui if he liked butter chicken. 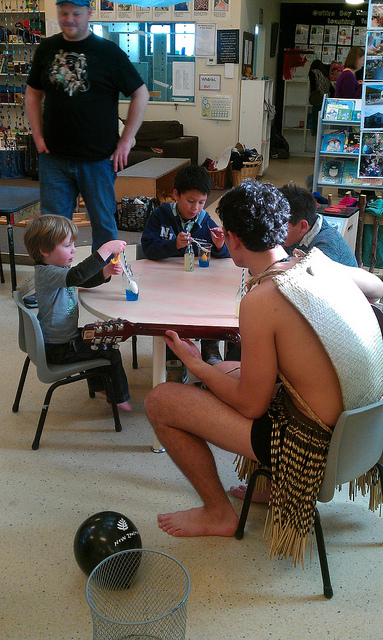 We cut the cake next, and then moved outside to beat up Tamanui te Ra.

Throughout the Pinata destruction Māui remained in character, talking to the kids and cheering them on. “Wow” we thought, “This guy is awesome”. We also got a lot of comments to that effect from the other parents, he was charming everybody. But that wasn’t the end of it, Māui had some games of his own, including try to sneak up and grab the fire. 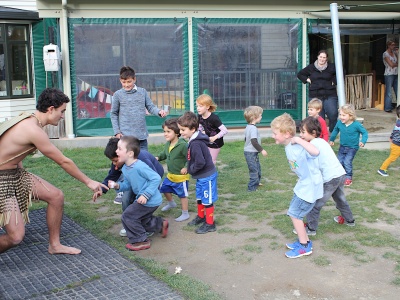 And tag, and hide and seek. The kids all seemed to love every minute of it, and as parents we couldn’t have been happier. It was a great party.

I would like to thank first of all Laurel, without whom none of this would have happened. Then of course Justin who stayed in character for nearly 3 hours and entranced 27 children the entire time. Then Kim and Tania who put us in touch with Justin. My sister and brother in law and my parents who organised all the food. Donna had once again organised the cake, she has done all of our kids cakes. This time it was Mahuika’s fire and the trees it leapt into. 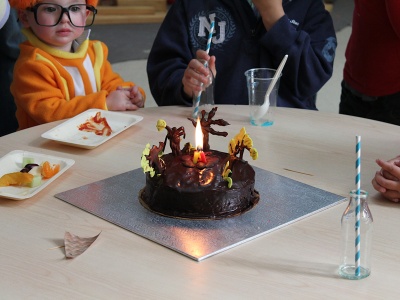 There were marmite sandwiches, cut into the shape of fish (Te ika a Māui). Blue jelly with a peach waka on it, fruit kebabs the kids had helped my mum and dad make, and fries with tomato sauce (heaped to look like a cooking fire).

Kathryn for dressing up as a Kete, Kristina for playing the role of Mahuika and most excellent photographer (a lot of these photos are from her and she took i think 147 photos).Finally all the fantastic friends and whanau who came to make it such a great day, one I am sure Te Pō Atarau will never forget (I certainly will never forget it). Not the least because Māui stayed right to the end and finished the day by doing a haka called Tika Tonu with 4 of the Tipoki – Lawton’s.

Let me finish this post with the words to Tika Tonu.

Seemed like a good idea but I spent most of it trying to stop the kids lying in the middle of shop floors. 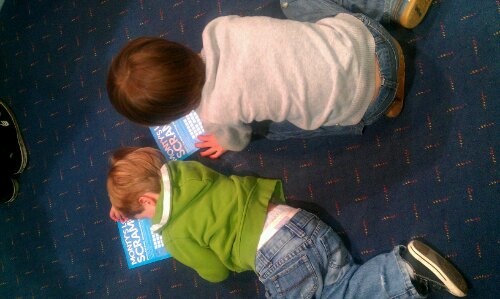 The maraca is the scanner, the big thing is the library card. Apparently Atarau owed fines, so had to go looking in his piupiu to try to find some money.

Yesterday Te Po Atarau had his tonsils and adenoids removed as well as his right ear drained. He came through the operations fine and stayed in overnight to sleep off the anaesthetic but is coming home today. Here is a quick picture I snapped with my phone of him trying to eat an ice block but mostly just falling asleep.

And it’s not just about the rugby, although for the most part it was a weekend of excellent games, a lot of which were tense and undecided for the best part of the game.

But for me, it’s also all the other things going on, highlights of this weekend include

I reckon it was a great opening weekend, I wish Wales and Argentina had won, but you can’t have everything. Fiji day at Te Papa on Saturday, you’ll find me and the kids there, bring it on. 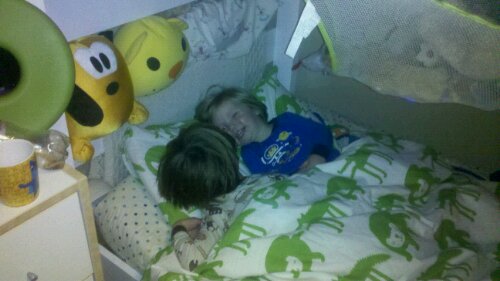 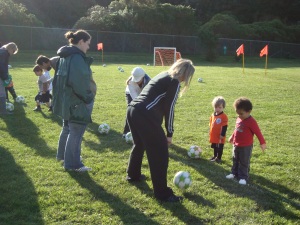 10 minutes into the game, he hasn’t moved yet 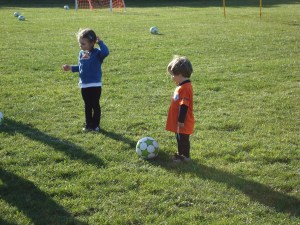 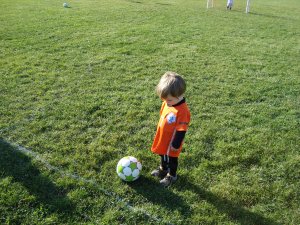 A couple of minutes later 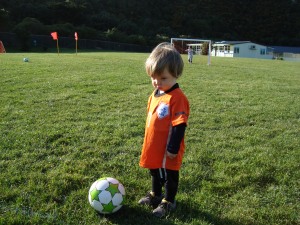 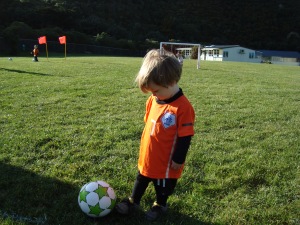 Ok, lets just pick the ball up and go 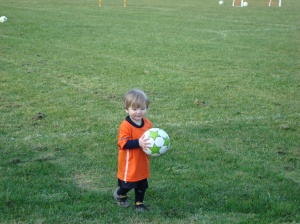 Some kids have a soft toy, like his big brother did, but Ata is quite happy hugging a giant spider to go to sleep. 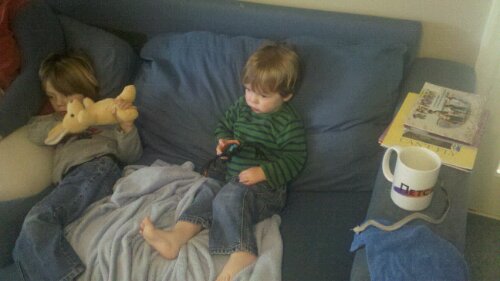 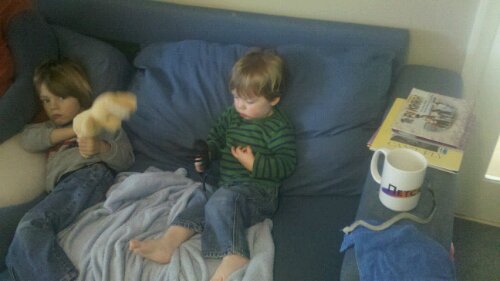